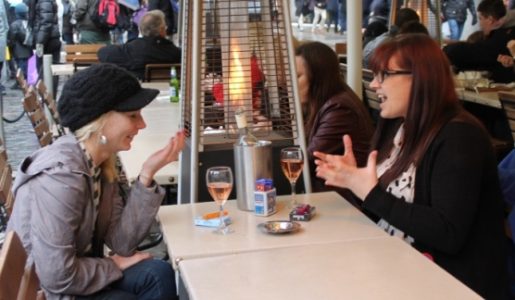 Talking is a basic human need and serves many useful purposes: through it, we can process our thoughts and feelings, share our ideas, communicate and connect with other people. Talking things over sustains relationships, sparks creativity and prevents wars; being listened to can be comforting, reassuring and empowering.

The system’s success depends on each person talking and listening in roughly equal proportion. This doesn’t have to mean in every conversation, but if one individual consistently dominates, sooner or later the other(s) will get fed up. If that individual is you, here are some thoughts for you to ponder.

Why do you talk so much?

Are you procrastinating? As the saying goes, I’m never too busy to stop and tell you at length how busy I am. It’s worth watching out for this habit because, to a greater or lesser extent, it’s sabotaging your progress – and it may be the thin end of the sort of wedge described below.

I’ve got a friend who is quite brisk on the telephone on a quiet day, yet when he’s overloaded with work he can talk about that for half an hour or more. If this is a pattern for you, you probably need to build more fun and relaxation into your schedule.

Are you building castles in the sky? Daydreaming out loud may feel good but it’s a far cry from making plans. Less talk and more action will make you happier in the long run, but if you’re feeling the need for this kind of escapism, take some time to nurture yourself and decide what you really want in life.

Is it a defence mechanism? Perhaps you use endless chatter as a shield, to avoid having to confront thoughts and feelings you can’t face. By dominating the conversation, you’re controlling its direction and keeping it safely away from areas you don’t want to go.

Also, you may be repeating and repeating – in the same or different words – mantras or spin of which you’re trying to persuade yourself and the world, as if saying them out loud will make them true.

Ignoring your issues will not make them go away: working on them will.

Is your mind so full of your own stuff that it can’t take in anything else? If you are in crisis, this is normal and your friends can be expected to understand. However, once things become less acute – or if your situation is more of a chronic one – you may need to make a conscious effort to let other people do more of the talking. Crucially, this involves not only being quiet while they speak but actually listening to them.

Being self-absorbed doesn’t mean you’re a bad person; it means you’re out of balance, out of touch with your authentic self.

Do you talk for attention? This is counter-productive. The more you yack on, the less attention your audience will be paying you. This is partly because, with the best will in the world, it can be hard to sustain concentration through an unnaturally long narrative, but mainly the problem is that once people start to sense their only function is to be talked at, they don’t feel valued and their motivation to listen soon ebbs away. In the long run, people may even start to avoid you because you’re such hard work.

Just because your friends and relations can’t cope with your endless talking, however, it doesn’t mean they don’t care about you. From their point of view, it’s the other way round: you don’t care about them enough to stop talking and listen. Pipe down and rebalance your conversations, then you’re much more likely to get the affirmation you’re looking for.

Is it about wanting to be understood? If that’s your goal, beware of giving too much information, in both senses. At a superficial level, the more words you use to express an idea, the less clear it becomes: all the padding is obscuring the message. At a deeper level, if you talk too freely about your inner turmoil, it can scare listeners away: most people are not accustomed to soul-baring and don’t know how to respond to it.

Take it slowly. If you want to be understood, it makes sense to explain how you feel – of course, and that’s great. But gauge reactions as you go and be prepared to back off if it’s not going the way you want it to. The mistake I made was to feel angry and resentful and to hit people with my misery, harder and harder, in a vain attempt to shock them into giving me what I needed.

Excessive talking is a sign of a troubled psyche. If you consistently take up more than your fair share of air time, try some quiet solitude and see what comes up for you.